British Homeotherapeutic Formulary (BHF), edited by Dr Damir A Shakambet, is the first compendium of nano-pharmacological bioregulating medicines. BHF is provided with detailed descriptions of function, indication, and recommended dosages, with an introduction to Bioregulatory Medical principles.

"In its form and function this book is a parallel volume to the British National Formulary, and should therefore sit alongside in all doctors and health practitioners bookshelves." Dr Michael Kirkman, MD (1937-2013)

Comprehensive textbook on Bioregulatory Medicine published by the founder of the Bioregulatory medical concept as a result of over 30 years of clinical and research work into systems biology and its clinical application. 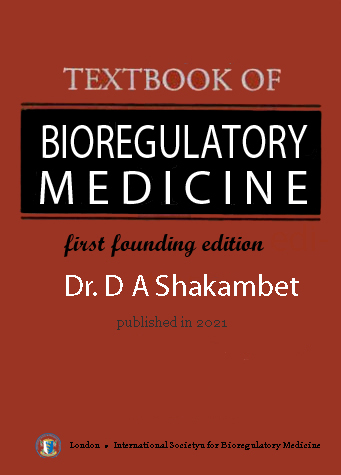 The book is divided into chapters from Lower and Higher systems of homeostatic regulation and following chapters provide clinical setting for each phase of disease development, from psychosomatic, inflammatory, degenerative and neoplastic phases with Bioregulatory treatment individualistic protocol according to the algorithm of homeostatic pattern of changes.
The book is in its final phases and will appear in the course of next year.

Press Release Publications Media
Cookies help us deliver our services. By using our services, you agree to our use of cookies.